On November 11th 2015, the first annual RLC Foundation Awards night was held at the RHQ RLC Officers’ Mess in Deepcut, Surrey. The awards and the night itself was to celebrate the logistic achievements, developing relationships and professional excellence of members of The Royal Logistic Corps, industry logisticians and academics.

There were four award categories on the night itself : the Regional Partnership award, the Best Professional Article in The Review (The RLC’s professional journal), the Junior Initiative award and The Master General of Logistics Mentoring Support award. There was also a special surprise award presented on the night by Lieutenant General M W Poffley OBE for The Master General of Logistics award for Outstanding Support to Civil Engagement. Each of the award categories reflects the aims of the RLC Foundation, which are to promote professional engagement and the exchanging of ideas between the army, logistics industry and academia.

The RLC Foundation Regional Partnership award was won by 6 Regiment RLC and Babcock International. This award reflects the success of the Defence Support Groups versatile work to support the redeployment from Afghanistan at short notice, when the original contractor failed. Their hard work ensured that the operational deployment remained on track. 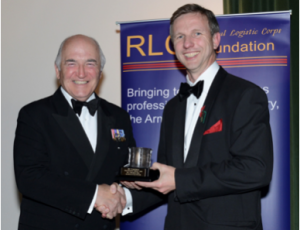 The RLC Foundation award for the Best Professional Article in The Review magazine was awarded to Mr John Manners Bell MSC FCILT, CEO Transport Intelligence Ltd, by Colonel (retired) P Chaganis OBE for his article ‘Engineering the Resilient Supply Chain.’ The Review is a publication produced annually by the RLC Foundation containing articles on logistics produced by serving or retired members of The Royal Logistic Corps, industry logisticians and academics.

The Master General of Logistics Junior Initiative award was won by Lance Corporal Harrop of 159 Regiment RLC, who, in addition to his primary role as the Commanding Officer’s driver has used his initiative and knowledge of social media to develop a range of support tools for the Regiment. He launched a highly successful Facebook based recruiting campaign, enhanced the use of the Defence Gateway page (which has now been accepted by his Brigade as best practice) and he has established a Facebook page for the Regiment’s PRI shop. In the small permanent staff of his Reserve Regiment he has used initiative and drive to excellent effect.

The Master General of Logistics Mentoring Support Award was awarded to WO1 McNeill of The Defence College of Logistics, Policing and Administration, who has personally championed the professional development of over 250 soldiers within the supply trade, from Level OneNVQ’s all the way up to MSc in Logistics.

Finally a suprise award was presented on the evening to Captain Nuzum who was nominated for the junior Initiative Award. A former Regular Major he reverted to the rank of NRPS Captain with 156 Regiment RLC. His work with RLC Reservists and in particular with those ex-Regulars transitioning into civilian life in the Liverpool area has been outstanding. His whole life approach to resettlement has widened the focus from direct recruiting into the regiment to supporting those with career transition by assisting with employment, housing, schooling, and registering with health services. In addition, he has been the focus for local engagement with a wide range of employers. This is reflected in the excellent recruiting figures the Regiment has achieved. In recognition of this outstanding work he was awarded the Master General of Logistics award for Outstanding Support to Civil Engagement.