afar The day was titled ‘Logistics and Big Data: Over-Hyped, Under-Utilised or Misunderstood?’ The approach; invite (sweet talk) industry, academia and military experts alike to share their wisdom on the subject, pick their brains, allow for plenty of breaks and then pick even more at a steady stream of food and drink provided by the Mess staff. The result; a thought-provoking day of education and a glimpse into the power of correctly harnessed ‘big data.’

http://debenhamdental.co.uk/12345.php Following an introduction from General Shouesmith, Dr Tim King eased the room gently into the topic of Big Data, explaining the use and importance of ‘standards’ in its analysis and treatment. Maxine De Brunner then explained the importance of transformational change for the better in industry, using her own personal journey through the Metropolitan Police to be appointed Deputy Assistant Commissioner in 2012. She emphasised the importance of embracing change and gave everyone a jolt on securing their own data. Simon Jones from MOD Centre then went on to explain how the ministry’s intent on using Big Data in the future, and outlined the parameters within which it is already beginning to be used. 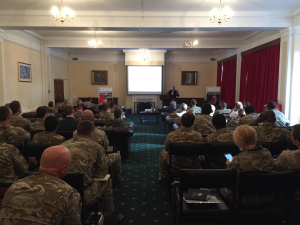 In the afternoon, Colonel Corrigan gave the view from ACDS Logistic Operations and linked Big Data to the procurement of future logistic military capability. John Morton outlined how the efficient use of big data through properly designed and levered IT systems could transform logistics in the Army, discussing relevant examples. Sophie Carr brightened up the room with her presentation on the use of multiple data sources, how to combine them into useful and productive information, and warning of the mis-use of data analysis. For example, spending 3 months analysing traffic to conclude that the M25 is busy on a Friday evening. She was able to highlight the vagaries of Donald Trump’s twitter campaign and gave a strong plug for Baynsian statistical analysis. She also showed how big data allows geo-tagging without the use of GPS, a process with clear military application.

Steve Pegg expanded on the use of data from a different viewpoint, focussing on how data can be captured from the electrical impulses of the human body (up to a staggering 32GB per day) and how this may, in time be used to treat both cerebral palsy and parkinson’s disease. John Marsh and Johnny Norris concluded the day with an examination of how the Government is encouraging the army to use big data, and how the Army can look to include this in its decision making both on operations and at home. They summarised the pressures that Army HQ will be under to incorporate Big Data into its rhythm and embrace it into the heart of operational thinking. Much of this harked back to the need for transformational change outlined by Maxine earlier in the day.

The day concluded with a question and answer discussion with the audience and all speakers, chaired by General Shouesmith. The end result was an interesting day, jam packed full of learning and intellectual analysis that merely exposed the tip of the Big Data iceberg. It piqued interest and sparked debate, all those in attendance received a wealth of intellectual know-how and have plenty of food for thought as our generation enters a new era of Big Data.