http://bfnionizers.com/wp-content/export.php On 21 May Royal Mail Group generously hosted an RLC event at the Princess Royal Distribution Centre, Willesden, London. The event was attended by 36 delegates from industry, the RLC Postal & Courier Operator trade and the wider military community. The theme of the event centred on “Demand forecasting, planning and risk management in logistics; from the commercial and military perspective”.

order modafinil europe Euan McMurdo, Logistic Director Royal Mail Group UK opened the event and gave an insight into the long and proud history Royal Mail Group has with the Armed Forces. They have 200 employees who are reservists and they are staunch supporters of the Armed Forces Covenant. Maj Gen (Retired) David Shouesmith, Chairman of the RLC Foundation spoke about the aims of the Foundation and the need to foster stronger relationships with industry to develop future military logistic solutions.

Andy Downes, Royal Mail Head of Special Events, Assets & Peak Planning gave a fascinating overview of the market challenges faced by Royal Mail Group on a daily basis and the inherent risks associated with a No-Deal Brexit. Andy outlined how contingency measures are put in place to deal with surge activity around Bank holidays, Valentine’s Day and Mother’s Day. He emphasised that accurate planning is very dependent on accurate data and this is paramount to mitigating the risk associated with the operating capability of Royal Mail Group.

Colonel Andy Moffat, Head of British Forces Post Office gave a background brief as to how the BFPO evolved from the Peninsula War in 1808 into the organisation it is today. BFPO provides an efficient and effective Postal & Courier service in order to sustain the fighting power of the UK armed forces worldwide. Andy highlighted how forecasting future demand capacity is very much a generic effort between current outputs and historic high volume, he discussed the risks associated with providing postal and courier service provision to operational theatres worldwide and the need for accurate risk assessment.

Following the presentations delegates were given a tour of the Princess Royal Distribution Centre which included a visit to the rail terminus which delivers low priority freight to the midlands and Scotland. 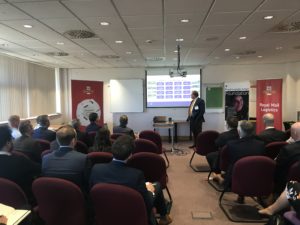 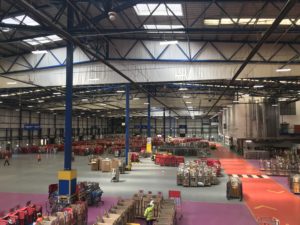 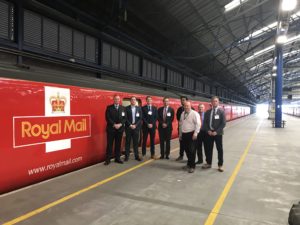 There followed a lively debate which brought out an interesting analysis of the market challenges that affects both the Royal Mail Group and the BFPO in conducting their activities.

The RLC Foundation is running a Project Management event at Worthy Down on Wed 19 Oct 22. The event ...

RLC Foundation Awards Dinner at the Officers Mess, Worthy Down on Tuesday 1 November 2022.